The Song of the Nighthawk – Silent Summer Skies

20 years ago, I lived with my young family in an old wooden house, known as “the Point House,” at the very tip of the then-wild island of Providenciales. The house was old, the wood sun-baked, and the yard was filled with the gnarled trunks and branches of coastal trees that told a tale of centuries of struggle against the elements of sun, sea and wind. Beyond the yard was the beach, so a short walk down a stony path took us to our own little white sand and turquoise sea paradise. At that time, the water was alive with living sand dollars, sea stars and molluscs of various persuasions.

At land’s end, a relatively deep but narrow channel divided Providenciales from the completely untouched islands of the Little Water Cay and Mangrove Cay. Those small islands were and are today Protected Areas that have been deeded over in perpetuity to those who rightfully own the land, Turks and Caicos rock iguanas and an array of herons, sandpipers, stilts, plovers and terns.
In the early summer months, as seasonal rains collected in the boggy roots and peat of Mangrove Cay, and mosquitoes, sandflies and their insect kin exploded in a frenzy of reproductive bliss, our island paradise home became a living hell.  The Point House was directly downwind from Mangrove Cay, and insects don’t observe the irrelevant boundaries of land.

In the first year of our residence, we thought we had reached our capacity to cope with the itching. Then one early evening, as we sat in the living room clawing at our flesh, a flock of hundreds of birds flew in to the yard. These birds had the body language of swallows, but they were much bigger, swooping and diving in a display of impressive acrobatics.  At times as they swooped towards the screened porch of the house, we thought they would crash, but they veered off at the last minute, vocalizing a strange creaky call, “karikidik-karikidik-karikidik.”  We were mesmerized.
After the first visit of the Antillean nighthawks, we noticed our habitat became more liveable once again. The mosquito population plummeted, and life resumed its normal sedate pace. Every night of mosquito season, the nighthawks visited the Point House, and they became our most-beloved birds, their creaky song was the blissful sound of relief. 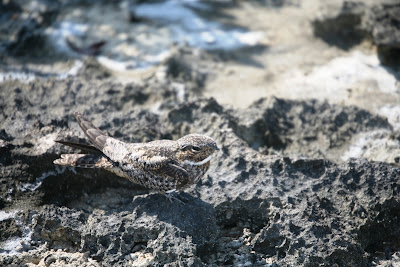 Over the years, in my ramblings across the wild places of the Turks and Caicos, I have stumbled across an occasional nighthawk or two, literally. Their mottled colouring perfectly matches them to the stony substrate they nest on. Laying one or two mottled eggs directly on the ground in a small stone depression, the bird then sits on her eggs and blends into the earth. When disturbed, the female fly away from her nest and pretend she has a broken wing to distract you from her eggs. This creative adaptation has allowed nighthawks to survive millennia against predation pressures.
But the little birds that nest vulnerably on the ground don’t stand a chance against the worst predator of all. The north-eastern shores of Providenciales are now lined with luxury homes and the mosquitoes controlled by chemical means. I had been back for a week before I saw my first nighthawk, but rather than flying in a group of hundreds of noisy kin, this nighthawk flew silently, alone across the evening sky.

Because the nighthawk’s habits are largely unknown, we don’t know where they spend their winters, for example, it is difficult to know exactly what is causing their decline. Some believe that the chemicals used to control mosquitoes are to blame, others point to the nighthawk’s nesting behaviour. An ingenious tactic of pretending your wing is broken doesn’t stand a chance against a bulldozer.

For now, I watch the few I see with gratitude and remorse, and I hope that theirs is not another journey to extinction. Their lone calls sing into eternity like a requiem.
Posted by killing Mother at 10:47 AM 4 comments: