I am not a fan of Hillary Clinton's, but I am going to vote for her anyway. I believe the Bill Clinton White House destroyed the liberal left in the United States. The first Clinton administration acted like a wolf in sheep's clothing, gutting social infrastructure, advancing the prison industrial complex to an unprecedented degree and masterminding the destructive global trade deals (WTO and NAFTA) that are systematically destroying national sovereignty, subsistence livelihoods and the environment across the globe.  I don't like Hillary's military record, and her politics are too far to the right for me, although I am pleased to see that the Bernie pressure has moved them somewhat to the left. I despise her ties to Wall Street. I supported and voted for Bernie Sanders and believe that, in many ways, the oligarchy establishment prevented him from competing fairly in the primary election. I am angry about that, and I join the millions of people in this country who are not going to let Bernie's legacy die. Systemic change is necessary and inevitable. If this election year tells us anything, it is that the system is broken and that U.S. democracy is for all practical purposes extinct.

I am also a person of privilege. I am white, educated and economically secure. I own my home. My children's college educations are mostly paid for.  I have no idea what it feels like to be afraid of law enforcement. I have never been stopped by a police officer, unless a taillight on my car was out. I have never been held back in advancing myself due to racial or other forms of discrimination (although I have had to deal with several annoying womanizing sexists in my time). I am in a stable marriage, my child bearing years are over (surgically, if not biologically), and I am profitably, self-employed. Anybody would consider me to be a lucky person. As far as my quality of life is concerned, it doesn't really matter who wins the 2016 election. I will be fine.

After the Democratic primaries were over, I was completely disgusted with the establishment, and I seriously considered not voting, voting for the Green candidate, doing a write-in or some other kind of protest vote. I rationalized that the establishment (and Hillary is about as establishment as you can get) will continue to win as long as we let them. The Democratic Party did not present me with a candidate who represents a majority of my values. I felt blackmailed because the only choice I had for President of the United States was between a war hawk and a fascist. One friend (Sarah) jokingly said, "This election we have two choices: we can vote for the Mafia or the Nazis." In other words, we can vote for the corrupt power status quo or something even more frightening.

I had just about convinced myself that I was going to cast a protest vote, but then I decided to suspend my own self-interest and take an objective view at the political landscape. I can afford my own healthcare in whatever form it takes. Very few other Americans can say the same, especially minority and under-privileged women, who depend on programs, such as Planned Parenthood to get access to basic services, such as pap smears and birth control. A Donald Trump presidency would restrict healthcare access to such people even further. Clinton would not, and would attempt to expand accessible healthcare if she has a responsive Congress. There is a vacancy on the Supreme Court. At least two other Justices are likely to retire in the near future. The next president will decide if the Court will be primarily conservative or primarily liberal for many years to come. If Trump is president, the Court will undoubtedly be conservative. Clinton will ensure at least a moderate or left-leaning Court. The list goes on. In almost every way a president can have an effect on society, Trump will send U.S. policy back to the dark ages, while Clinton will, at worst, maintain the status quo.

Voting for a third party candidate is a choice that privileged people can make. They can make their protest statement, and tell themselves that they have done a good deed. The under-privileged don't have such a luxury. For many of them, who will lose access to healthcare, lose food stamps, lose housing subsidies, etc., this election is really a choice between life and death. Vote third party, but have no delusions that while your life won't change, you may be destroying the lives of others in the process.

Here is a picture of an otter in Alaska to make you smile (they will also be at risk from a Trump presidency): 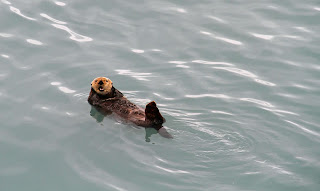