In ancient Japan, early agriculturists worshiped mountains as the givers of life and fertility. As clouds gathered at the mountaintops, rain filled watersheds carrying nutrients from rich mountain earth downstream to nourish and water life-sustaining crops.
In my neck of the , the Cherokee people call the mountains “Kuwah’hi” or “sacred.” For hundreds, if not thousands of years, the Cherokee people maintained this ecosystem reverently, but in the short space of time since the European race has invaded, the landscape has been deforested, myriad species and ecological associations have become extinct, the waterways have been polluted, and the landscape has been sacred with carelessness. The ultimate heresy to this land is the current practice of lying to ruin entire mountains to extract coal.
Mountaintop removal coal mining is the process of blowing up mountains in order to harvest coal to burn in order to boil water, to turn a turbine for electrical production. Not surprisingly, this inherently destructive process is characterized by a number of direct and indirect environmental, social and economic impacts.
The most obvious impacts of mountain top removal are visual impacts to the landscape and the complete loss of all natural communities that happen to inhabit the mountain ecosystems slated for removal. These impacts are irreversible. Although mitigation measures for land reclamation are required by law, in practice, these measures often amount to minor efforts at hydroseeding with grass seed. The mature alpine hardwood climax forest ecosystem with associated diversity of flora and fauna cannot be replicated on a completely decimated landscape.
The process of blowing up mountains to harvest seams of coal necessarily produces a tremendous quantity of overburden material. This overburden is then disposed of in valleys and streambeds, devastating aquatic ecosystems and watersheds. The U.S. Environmental Protection Agency (EPA) estimates that as many as 1,200 miles of stream have been buried and destroyed in this fashion.
In addition to overburden, the slurry from the mining process itself is a toxic brew. Slurry heaps are retained with simple earthen dams. These dams are subject to failure and have historically led to the toxic contamination of land, air and watersheds with heavy metals, volatile and aromatic organic chemicals and other toxins injurious to public health and wildlife. Fish kills and reductions in aquatic biodiversity are common in mountaintop removal areas. In Martin County, Kentucky one such dam failure flooded the Big Sandy watershed with 300 million tons of toxic sludge, causing what EPA has referred to as “one of the south’s worst environmental disasters.”
The social and economic impacts of mountain top removal are enormous. Residents in nearby towns are subjected to a number of deleterious effects. Blasting from mining operations often takes place around the clock, causing extreme noise and vibrational disturbances that have been known to crack the walls and foundations of homes. Intense blasting can also lead to fracturing of bedrock in adjacent areas that can disrupt groundwater hydrology, causing the drying up and toxic contamination of residents’ wells. As the vegetation and topsoil are scraped clean from underlying bedrock, mountaintop removal areas are primed for runoff, causing increased flooding in adjacent communities.
While the coal mining industry ingratiates itself into local communities with the promise of “good” jobs, in reality, the process of mountaintop removal is highly mechanized and uses considerably less labor than conventional coal mining operations. The coal industry also claims that traditional mining results in higher costs to the consumer, but what the consumer saves in production costs, he/she pays back tenfold in environmental and public health consequences. Ultimately, towns adjacent to mountaintop removal sites are left with a devastated environment, massive restoration and cleanup costs, which are borne largely by taxpayers, and little to show for their ruined qualities of life. Meanwhile, the powerful corporate entities that have created the havoc emerge with huge profits.
What does it say about a people who care more for the combustion of a dirty fuel than the sacredness of beauty or the regenerative capacity of life itself? 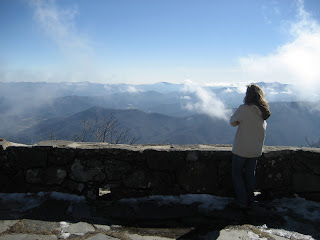 The view from Wayah Bald, just a few minutes from my home in the . We are spoiled for majestic mountains around here. Still, I can’t imagine sacrificing a single peak in this view.
Posted by killing Mother at 2:22 PM