North America and I have reached mid-life. My doctor tells me that at 52, I am actually not in mid-life, but old, and I suppose the same is true for the United States and to a lesser extent, Canada. We have enjoyed the exuberance and productivity of youth, fueled by abundant energy. We reached our peak, thinking it would last, but now decline seems unavoidable and inevitable. I have spent the past thirty years navigating a miasma of motherhood, marriage, work and most-recently, higher education, every day an endless stream of things to do, people to nurture, deadlines to meet and expectations to fulfill. I can’t remember what it feels like not to have something to do for someone else.

I wouldn’t trade away a day of time from those thirty years. I have amazing adult children, a rewarding and satisfying career and a usually understanding and loving husband. I love my life. I do, however, feel a bit unanchored as I face the future. The kids are grown and independent. I have “arrived” at where I want to be professionally. For years I have been defined by my role, “mother,” “wife,” or by the work that I do, “environmental scientist.” I have been categorized and placed in the convenient cubby holes of others’ and my own creation. I am having trouble seeing beyond the confines, now that the boundaries are no longer relevant. Like stepping outside on a bright day after sitting in the dark, the unconstrained light is overwhelming and blinding. Who am I? What am I doing? Where am I going? Out of confines, the answers to these questions are not as clear as they once seemed to be.

North America is at a similar crossroads, propelled forward over a few generations to exceptional economic growth and world domination via the exploitation of fossilized hydrocarbons sequestered within the Earth, or “fossil fuels.” Our use of fossil fuels has facilitated unprecedented growth and advancement, and it has increased carbon dioxide levels in the atmosphere from about 280 ppt, prior to the Industrial Revolution, to over 400 ppt today. Readily accessible crude is gone. We are now squeezing tar out of rocks and sand, pulverizing the bedrock of the planet and removing mountaintops to get at the precious hydrocarbon elixir upon which our prosperity was built. The capitalist economic reach is globalized, and very real thresholds of extinction, global climate change and potential environmental collapse are visible on the not too distant horizon.

2015 was the hottest year ever recorded. Such a statistic would not be significant on its own, but it occurs in a context where the sixteen hottest years on record have all occurred since 1998 (https://www.ncdc.noaa.gov/sotc/global/201513). In other words, sixteen of the past eighteen years have all been record-breakers. Skeptics will suggest that warming periods have occurred throughout Earth’s history and that the current pattern of consistently hotter and hotter years is a natural trend (note this is a departure from the skeptics’ previous complete denial that the planet is even warming).
Fragments of fact can be found in all fiction. Earth has been hotter and colder during its 4.5 billion-year history, but has never before, as far as we can measure, become this hot, this fast. We also know that Earth’s heating and cooling patterns are significantly correlated to concentrations of carbon dioxide in the atmosphere. During Earth’s hottest era (the Eocene), carbon dioxide concentrations were as high as 1,000 – 2,000 parts per thousand (ppt). During Earth’s coldest era, during the last glacial ice age, carbon dioxide levels were around 200 ppt (http://blogs.ei.columbia.edu/2014/07/11/what-geology-has-to-say-about-global-warming/). At the current rate of increase, atmospheric carbon dioxide will measure 780 ppt before 2050, a level believed to be a threshold at which Antarctica melts. 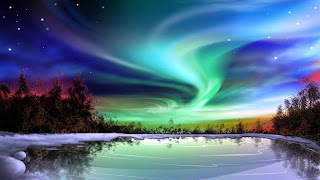 The cornerstone of environmental evaluation is called a baseline assessment. Before the effects of human activities can be predicted, one must know the starting point or baseline. The baseline is not necessarily pristine, for one must also know where to begin before one can heal what is broken. A baseline can be perfect and whole or utterly devastated, but it represents an untarnished truth.
In a couple of weeks, I will leave behind the orderly world of work, school, motherhood and marriage and head on a journey across North America from Asheville, North Carolina to Prudhoe Bay, Alaska. Along the way, I will conduct a personal and environmental baseline assessment. I plan to take in as many realities as I can, from ghost bears in British Columbia to tar sands in Alberta. I will contrast topless mountains in Kentucky to the Northern Canadian and Alaskan wilderness. Fracking fields and northern lights are also on the itinerary. I will read a lot of books, sleep in a tent (or the car in grizzly and polar bear country), listen to my thoughts, write, take photos and do a lot of hiking along the way. At the end of my journey, I will know the truth of things.

p.s. I am open to ideas for places to visit, travel tips, good yoga studios, how to offset my carbon footprint and anything else that might be deemed significant. Let me know.

*I poached all images from Google searches. They are not my own.
Posted by killing Mother at 2:29 PM 4 comments: