The Dividends of Nature

Man and beast, plant and soil lived on and with each other in mutual toleration, to the mutual benefit of all…[but] the new overlords did not understand this. They did not include soil, plants or birds in their ideas of mutuality. The dividends of such a balanced economy were too modest. – Aldo Leopold in “A Sand County Almanac”
Dearest and long-suffering Readers,
You may have noticed my negligence in blogging lately. I have once again decided to subject myself to a continuing education at Harvard, two classes this time, which is taking up an inordinate amount of my time. When it rains it pours, and I have also found myself gainfully employed with real work in the past few weeks, an anomaly for an environmental scientist in the most-recent, budget-cutting frenzy of political shortsightedness. Hopefully, I will soon have some other exciting news to share with you, but I am keeping that under my hat for now.
Nevertheless, I will attempt to keep posting as regularly as possible. One never knows when the muse will decide to get active, but I will try to keep exercising her, lest she get too complacent. In the meantime, I need to nurture her, rather than expect continual productivity without nourishment for her inspirations. Perhaps this is why she remains reclusive in these times of external stresses of the modern world. 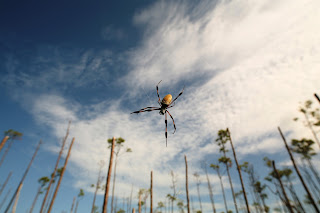 Last week, I was in the Bahamas, working and with my nose pointed to the woodland floor and counting floral species as carelessly as if they were mere numbers on a spreadsheet, when my colleague, who was operating the GIS aspect of the project, pointed out a spider to me. The banana spider (Nephila spp.) was a stunning example of the infinite creative capacity and ingenuity of nature. Downwind from the dump, the clever beast had strung her magnificent web across a twenty-foot span between two pine trees in order to capture the inevitable flying insect that might happen by. If not for the observations of my colleague, I would have missed this tiny miracle.
Perhaps she was a sentinel sent from the cosmos to remind me about what is important in my life. Paying down credit cards is satisfying, but at what cost do we toil for such meaningless purpose?
I hope you all take some time to nourish your own muses this week. Mine should be back on the job soon.
Posted by killing Mother at 3:03 PM No comments:

Poisonwood and Other Guardians of the Woods

I am in transit from Grand Bahama Island on my way back to Turks and Caicos, sitting in the Miami Airport, scratching welts on my arms and legs.
While in the Bahamas, I was surveying the terrestrial ecology of an area of Pinus caribaea var. bahamensis woodland. The area is slated for land clearance, and I was hired, as I often am, to catalogue the ecology of a place prior to its destruction. The work is sometimes frustrating.
Grand Bahama is spoiled in terms of pine woodland areas. Almost the entire island is covered with them, with a few other areas of wetlands, coastal habitats, intermittent sandy dunes and tidal mangrove estuaries. The human population is primarily centralized on the western end of the island, leaving much of the remaining areas wild.
Given the predominance of pines, and the fact that they have a nasty habit of catching fire and threatening nearby structures, prescribing conservation of these habitats is a hard sell. But with a little luck and persuasion, the generally conscientious Bahamians are happy to discuss mitigation and relocation of threatened and endangered species, when possible. Life as an environmental scientist is all about the little victories.
As a frequent resident of temperate mountain forests, I have forged a hate-hate relationship with poison ivy (Rhus spp). The Cherokee in my area have a different perspective. They say that poison ivy is the guardian of the forest. It usually grows at the edges of the forest or in areas that have been cleared. Its purpose is to keep out those who would do harm (or not), so they say.
The Bahamian pine woodlands also have a guardian, Metopium toxiferum or “poisonwood.” While poisonwood is a tree or shrub, not a vine, poisonwood and poison ivy are close cousins, both hailing from the Anacardiaceae family, and they share a similar irritating, oily defense mechanism. Thus my system, made ready from years of exposure to poison ivy, readily welts in the presence of her tropical cousin.
The thing about poisonwood in the Bahamas is that it is the dominant understory species in the pine woodlands. Every square meter sample of every transect counts at least one individual. Apparently, the pine woodlands are in extreme need of protection. Nature clearly wants to keep naked-skinned mammals out of her woodlands.
In the past centuries, the Bahamian pines were cleared relentlessly for lumber, yet they have managed to recover. I wonder if the contemporary pine/poisonwood association resulted from these previous assaults. No quantitative records exist to confirm this hypothesis. Just as animals exposed to hunting become weary of humans, I imagine the pine woodlands are also now wise to the world and are protecting themselves against a hostile new reality. As I scratch and scratch and praise the gods of Claritin and Benadryl, I find solace in these thoughts.
Posted by killing Mother at 3:05 PM No comments:

Bronze Age Science – A visit to the Creation “Museum” in Petersburg, Kentucky

Sad. Sad is the singular word that kept popping into my head as I made my way around the Creation Museum in Petersburg, Kentucky this past Saturday. While I would normally reject supporting such an institution monetarily, my sister and I were on a road trip to Indiana to visit our uncle, and the “museum” was directly off our route. Morbid curiosity got the best of me. 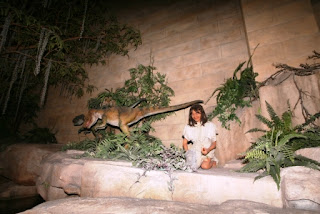 The Creation Museum should not be called a “museum,” at all. The typical use of that word implies that some scientific method was at some time employed to offer an understanding about the objects held within said museum. No such methodology of science was employed at the Creation “Museum.” Instead, the establishment used a system of understanding that luckily was abandoned by the scientific community centuries ago, along with the Inquisition and the burning of witches at the stake. 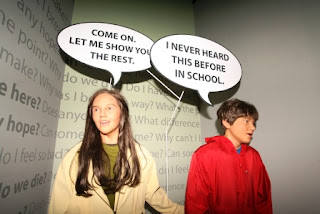 In science, nothing is assumed. Natural “laws,” like Newton’s law of gravity, are arrived at through endless repetition and experimentation, yet even when the same result is achieved at every interval, such laws continue to be falsifiable. Nothing is etched in stone or scroll. Science knows no tyranny of text. More can always be learned and even the most paramount of laws are subject to change.
The entire Creation “Museum” is based on perversion of science. As a basic premise, creationists assume that the Bible is inerrant “word of God” and deductively draw conclusions based on that assumption. The problem is that the basic premise from which they draw their conclusions is inherently flawed. There is no scientific data to support the claim that the Bible is literally true. In fact, substantial data suggests the contrary premise: The Bible is a collection of stories, most definitely written by men who had only a Bronze Age understanding of the world.

Sad. And ironic. Throughout the “museum” the creationists have gone out of their way to try and prove that their restricted view of reality is the correct one. Displays contrast “man’s reason” to “God’s word.” Sadly, the “museum’s” developers must have been immune to the reality that the Biblical “God’s word” interpretation of the world pales in comparison to the “man’s reason” version they are contrasting it to. Furthermore, what they are referring to as “God’s word” is also man’s reason, albeit a 2000-3000 year-old version. 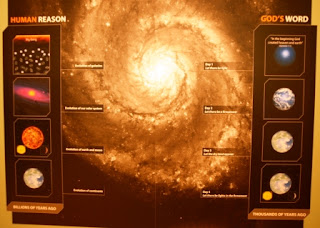 On one side of a display, man’s reason recounts the Big Bang, an expanding universe of infinite possibilities, and the phenomenon of life, ever-evolving into unique and diverse forms. On the other side, God’s word confines the miracle of creation to the static imaginings of a tyrannical patriarch on a hierarchical throne, created in six, 24-hour days, unchanging and limited for eternity by a dull, unscientific simplicity.
Here the fossil record decoded by man’s reason reveals a tree of life and a history of myriad organisms springing forth from primordial brine, evolving and entering into extinction in perpetuity. There, all that exists was placed upon an impossibly small ark, leaving the rest to drown in a single, cataclysmic flood. Nothing new will ever be made. The earth, in this view, creates nothing new, ever. Sad.

Children dragged to this “museum” are taught that the world and all its mystery can be explained within the pages of a single book, a book with words penned by men, who had no knowledge of the earth orbiting the sun, of a vast universe or of a spherical earth, 2000 years ago. In the bookstore attached to the “museum,” one can find entire curriculums that reinforce the narrow creationist view and an entire series of books entitled “Kid Answers” which provides scripted responses for those pesky children who insist on questioning everything, lest they actually develop open and inquiring minds.
If they are lucky, these children will learn in public school that the earth and the universe are in fact, much more miraculous than the imaginings of the minds of Bronze Age tribal, desert-dwelling patriarchs. Hopefully these children will learn that the greatest reality humans can enjoy is to seek knowledge, unlimited knowledge that is only constrained by the depth and reach of the human imagination.
Posted by killing Mother at 11:22 AM 13 comments: