We the Majority have the Actual Power.

With the Electoral College U.S. Presidential win by Donald J. Trump, self-proclaimed racist, xenophobe, misogynist, scientific skeptic and assaulter of women, the majority of people in the United States woke up on 11/9/2016 in a state of shock, bewilderment and despair. Trump's proposed agenda [of stepped-up corporate welfare, dramatic tax cuts for the 1% (who are already not paying their fair share), elimination of healthcare benefits for millions of people, rolling back of civil rights for women, minorities and immigrants, state control of women's reproductive choices, unconstrained fossil fuel development and exploitation, etc., etc.] is made even more frightening by the election of a Republican House and Senate, which have the power to actually help him realize his extremist objectives. In the face of what can be described as a national and global tragedy, finding any prospect for hope can be a daunting task. In order to do so, Americans will have to rediscover and employ one of the tools that is at the heart of our republic and democracy.

For many, the idea of civil action and disobedience is a naive notion that will achieve little, but nothing could be further from the truth. For every horror that Trump and a Republican Congress can inflict, an effective remedy can be unleashed. For example, if Trump and the Republican Congress start building a wall and deporting Latino immigrants, Latinos and their allies can choose a few strategic days to stay home from work. In many industries, such as agriculture and fast food, undocumented workers make up as much as 25% of the work force. A large-scale walkout of affected workers in these industries would not only raise public awareness about the contributions that undocumented workers make in our economy, but would also effectively bring national commerce to a standstill on the scheduled days off. If carried out by large numbers of people, repercussions would be minimal because the affected industries would be incapable of firing participants. There simply aren't any replacements in large numbers, with U.S. unemployment currently hovering in the 4% range.

During the 1970's oil crisis, consumers of fossil fuels engaged in car pooling, exchanging gas guzzlers for more efficient vehicles and countless other effective energy conservation strategies. When the cost of gasoline skyrocketed under the Bush Administration, people once again tightened their fossil fuel belts and decadent fuel hogging vehicles became replaced as the transportation of choice with Prius and other hybrids. The simple reality behind global climate change is that we are all complicit in its existence. If our government is unwilling to take action, we can still do it ourselves. If every conscientious consumer committed to reducing their carbon footprint by 50% over the next four years, the scurrilous oil companies, laying their pipelines down over stolen tribal lands, would take a massive hit in profits to an extent that might make them more amenable to climate negotiation. Replacing traditional energy sources with solar and wind on an individual basis would also empower and strengthen green industries, making them more competitive and fostering additional defections from the fossil fuel giants and their political cronies.

Many of us can take our action further into civil disobedience. Non-violent civil disobedience can result in misdemeanor arrest, so it's not for everyone. In my case, my self-employed job is secure and would likely be enhanced by such an outcome. Others are simply willing to put the interests of the greater good over their own interests. In any case, civil disobedience can be an effective tool in combating injustice in the system, particularly when significant numbers of people participate.

On December 5th, 1955, Rosa Parks was arrested and put in prison in Montgomery, Alabama for having the audacity to refuse to surrender her seat on a bus to a white woman. Her small act of civil disobedience launched a massive boycott of bus services and ultimately culminated in a Supreme Court ruling on the unconstitutionality of segregation laws. In our modern times, we are at risk of losing all the gains that have been made since then. Collectively, we can gather in large groups to impede access to County Clerks' offices, courthouses and places where marriage licenses are issued if any erosion of LGBTQ access to these services takes place. We can boycott any corporation, such as Walmart, that does not provide living wages to all its staff members. We can refuse to pay any federal or state income taxes if those governments attempt to rob us of the donations we have made to Medicare and Social Security. If women's reproductive rights are eroded, we can all stay home from work in order to demonstrate how important it is for women to be able to make their own life choices, including both work and family choices.

Since the Civil Rights Movement, Americans have discovered social media, television, sports and other distractions that have kept us largely off the picket lines and in our living rooms. Perhaps it is no coincidence that little progress has been made in recent years towards fair wages for the working class, minority rights and other societal ills. Where gains have been made, such as for LGBTQ equality, such gains can be directly correlated to the concentrated, passionate and continuous civil actions taken by members of that community and their allies.

Standing up to and undermining the wave of horrors that may await us will not be easy, but it is not impossible. Those who have been put in power represent a small minority of people residing in the United States, only 26% of eligible voters. We are the many and they are the few, and the many always have the power if they choose to exercise it. If we choose to stay home and stare at our televisions instead, then we will have nobody but ourselves to blame for the results. 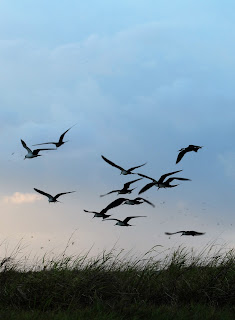 Posted by killing Mother at 4:27 PM